Hope you are all doing spectacularly!

I'm still trucking along on this update and I'm starting to get close to a beta build candidate.

This month I finished up the core system improvements I mentioned in the last post. That was a real slog but hugely improved performance and I'm happy with the state it's in.

I had to take last week to fix up the tooltips in the game because they were driving me nuts. They had lots of weird positioning bugs and the under-the-hood way they updated was super confusing. I also wanted to do a pass on the entity tooltip as I have always felt it was poorly done. This is the expanded version (holding ctrl) of the entity tooltip: 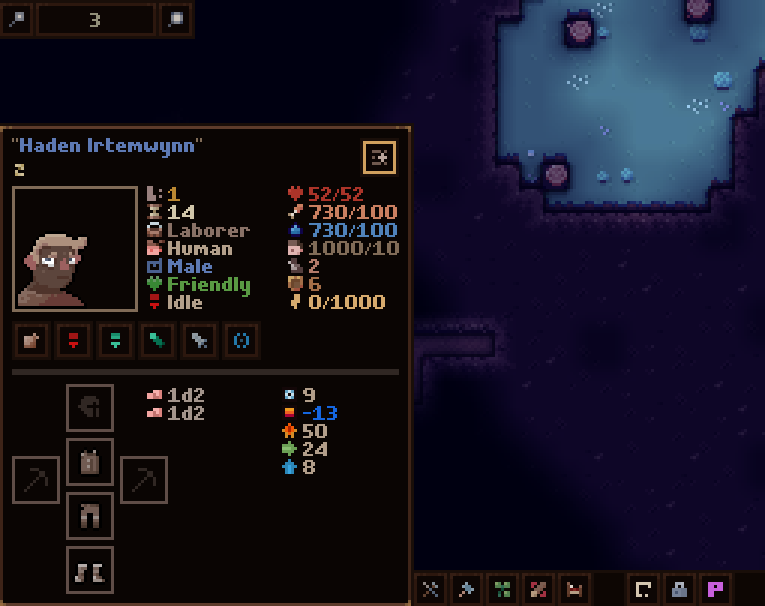 And collapsed (hovering over a target entity): 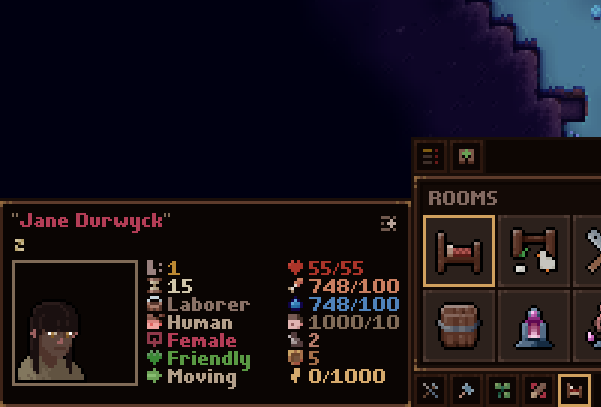 As you can see, it's much more organized but there are a few additional elements. Namely, the player can see an entity's equipment now. I've also moved all the command options over to here (you see them when an entity is selected).

Tooltips now support multiple targets, meaning you can have an entity selected but also see the block your cursor is over. Whereas, before, you'd only see the entity.

I spent some time unifying the overlays for jobs, zones, etc. Plus, the overlay is way clearer regarding whether blocks are in the air, an obstruction, covered, etc. 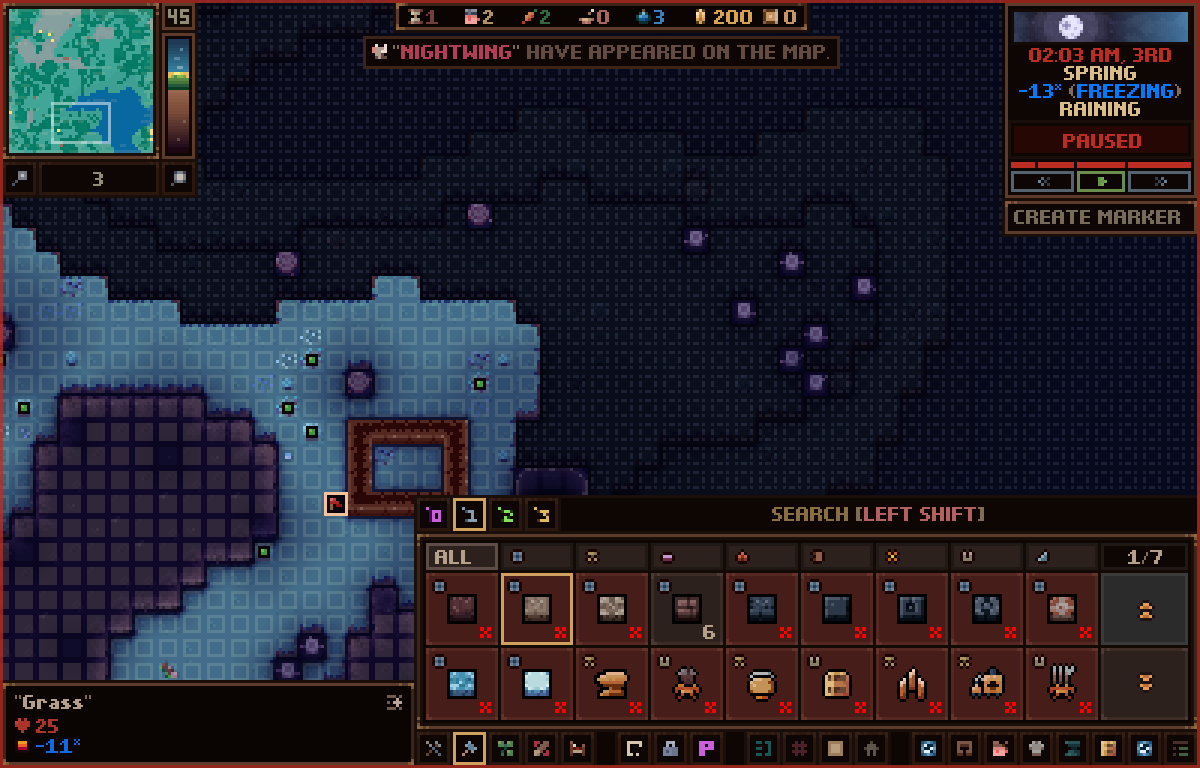 You'll also notice I've re-organized the hud. The toolbar has been moved over to the right and merged with the overlay window button panel. I've gotten rid of the utilities toolbar menu, and all utilities can now be accessed from that bottom right bar. This takes one click step out of accessing them. Plus they now have their own hotkeys. 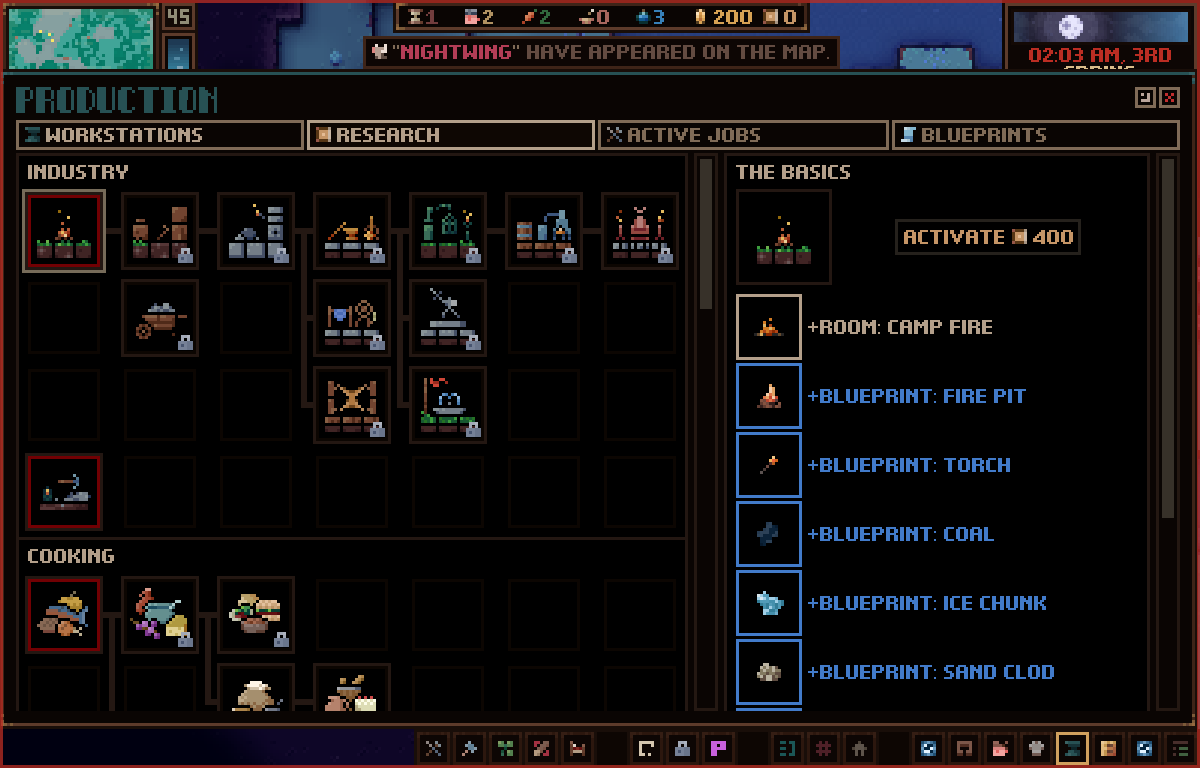 All the toolbar menus (i.e., jobs, blueprints, plants, zones, rooms) have access to the search panel. So you can now use SHIFT+'Char' to narrow down the buttons there. Players can also now click the search panel to enter search text rather than holding shift.

I've updated the hotkey settings to allow for modifier keys to be used (as well as fixed a ton of hotkey related bugs). So, now players can change opening the job menu to SHIFT+J or whatever hotkeys they choose. I still have to make mouse hotkeys editable! One day, I swear! xD

With the vast majority of system and UI fixes/changes/additions out of the way, I can finally finish up adding the new content I was working on. i.e., new capture props (cages and such), weapons, gear, etc.

OH, I also found a new place to live and am moving at the end of the month. With that also out of the way I can get back to my regular work schedule. This last month has been really tough to get a lot of work done due to that and current world events. So, thanks for all the kind words and patience.