You can now select and play as the Ardyn!

They are a completely different race from Humans in pretty much every way. The main difference being that they don't need food or water to survive. Instead, they age much faster than all the other races. For them, every hour is equivalent to one day of aging for normal entities. This means that they die of old age (Senectia - an aging disease unique to their race) much faster.

They prevent themselves from getting old through a process called retroanimation. Retroanimation takes the life-force from one entity and gives it to the Ardyn, stealing their youth to keep the Ardyn young. This requires the Ardyn to constantly need to maintain large populations of captured entities to survive. Many other races fear the Ardyn because they ruthlessly hunt and capture all living things. 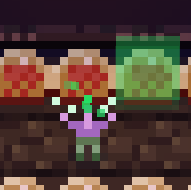 The Ardyn also differ from Humans in how they reproduce. They can have companions but they don't procreate with a partner and spawn offspring. Instead, when an Ardyn dies, their bodies can be turned into Astrasomes. These organic seed-like pods are used to grow a plant called a Chronoblast. Caretakers of Chronoblasts must feed them life-force to help them grow, and when they are mature, they produce one adult Ardyn settler.

There are three new rooms for the Ardyn to use. These can only be unlocked by having an Ardyn settler.

This is the main fabrication room. It is where Ardyn workers can create items like Astralite, Astrasomes, and Nyctium. As mentioned previously, Astrasomes are used to create more Ardyn settlers, but Astralite and Nyctium are mainly used for constructing things.

Astralite is a dense material that is the biproduct of Nyctium being fused with the life-force of an Ardyn. It is extremely valuable because of its difficulty to make and is often used to make advanced containers like Astracubes.

Nyctium is an organic material that is heavily used in Ardyn construction. It is unique in that it can only be harvested from the Nyctoid plant (more on that later). 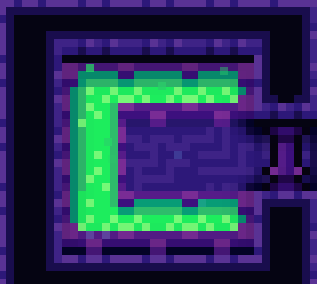 The Somnic Pools are where the Ardyn use retroanimation on entities to remove Senectia and make themselves younger. 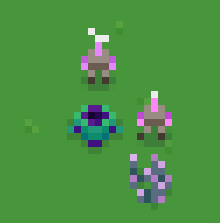 This plant is grown by Ardyn Technochrons to produce the rare material, Nyctium. It requires the remains of an entity to be planted, and, over its lifetime, must be fed life-force by the Ardyn farmers. 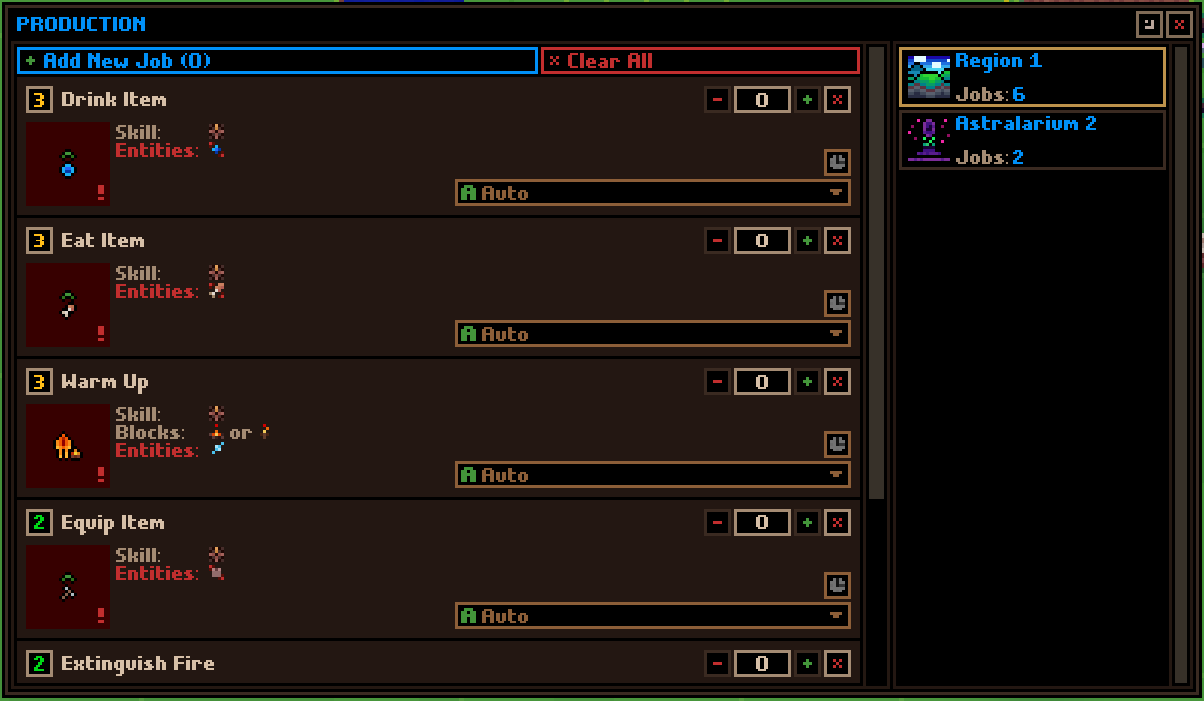 With the Ardyn basics covered, let's talk about some improvements that have been made to the various windows and UI elements. First off, the production window. I've received so much great feedback about this screen. It is a complicated beast. This has made it quite tough to present in a clear way but I've done a lot of work with this update to help improve its presentation and how the various jobs communicate their requirements.

One change that I think makes things much clearer is that the jobs are now immediately placed in the room, and no longer queued. If you manually add a job, it will be placed in the room. However, this can only happen if the requirements are met.

Lots of work has been done to better communicate job requirements. There are five main areas of requirement: 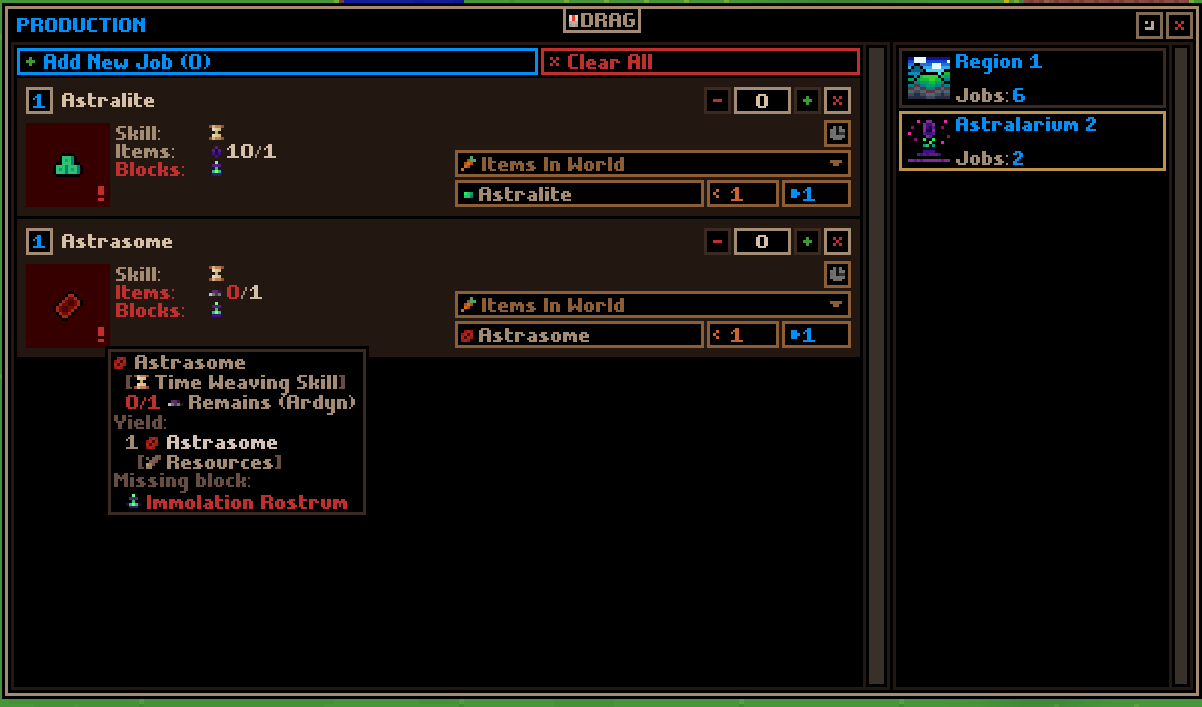 You can now specify the hour and season jobs get created. This could be handy if you only want people to farm certain crops in winter, while switching over to something else for spring. 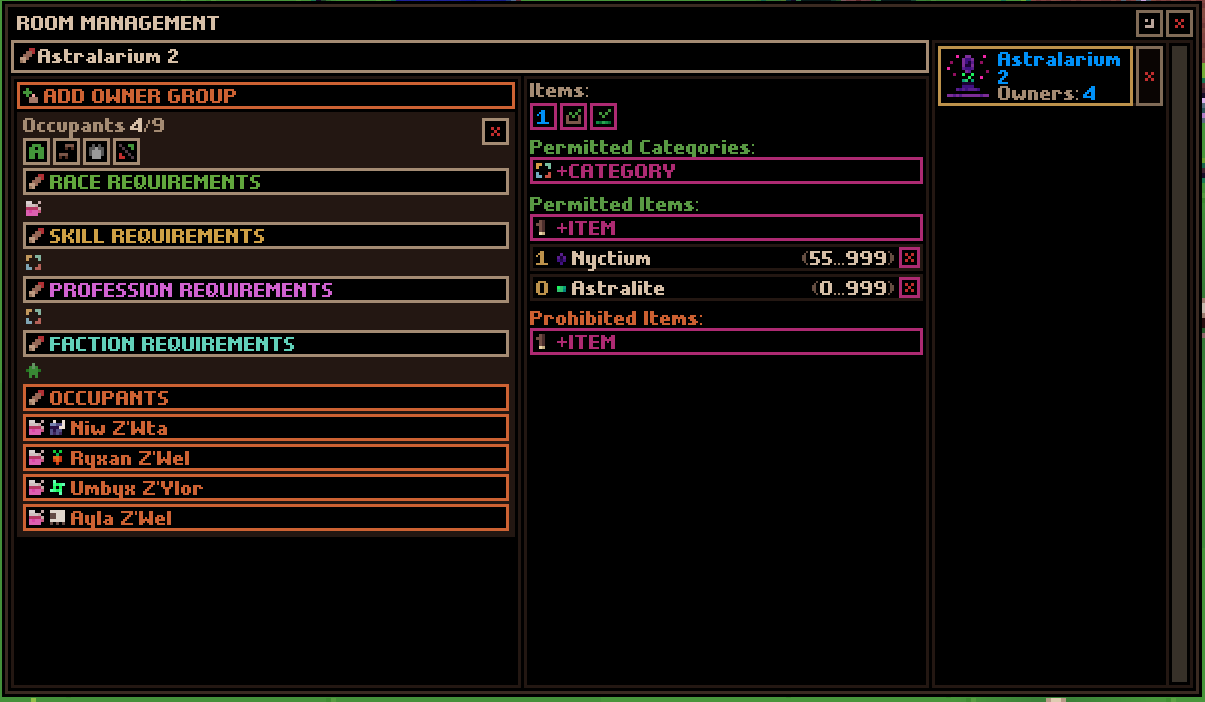 This lets you make stockpiles a high priority if you want items moved their first.

This lets you specify items that you don't want in a stockpile.

This lets you choose the min amount of items you want in the stockpile at all times, as well as the max amount. The settlers will do their best to keep the item inventory count in between these values.

Characters now show the items they have equipped on their sprite. So, if you deck out an entity in full rutile armor, you'll see a little red settler running around. If they have a pickaxe equipped, you'll see this on their back. 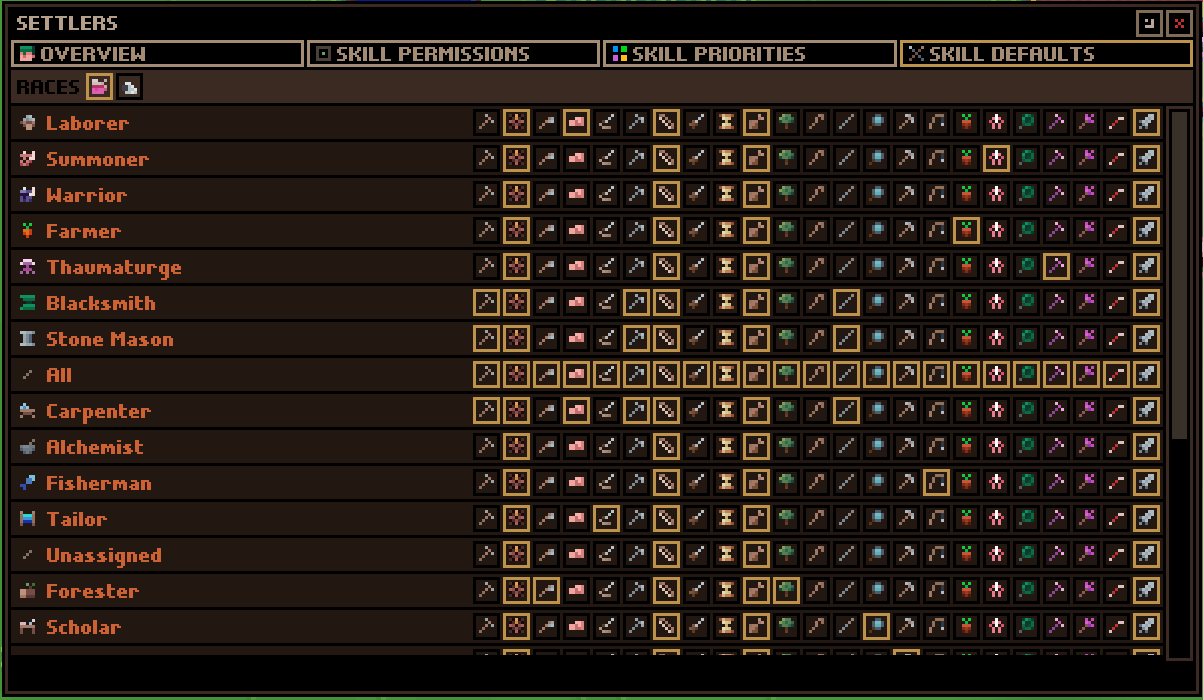 This is a new sub-window that is part of the Settlers window. Its purpose is to let you specify which skills start enabled when an entity spawns. So, for example, if you want new Void Woken summons to not have mining on, you can set that here.

You'll notice a new 'room' called Region in the production window. This room represents the entire map, and it houses all of the core jobs that entities need to create in order to do basic jobs to survive. For example, eating and drinking can be found here. Players won't really need to edit these jobs, but I wanted to surface all of these to players to make sure things are clearer. Before, all of these jobs were created under-the-hood, and it was tough to know what requirements were used to create them. Now, you can see all of these from Production.

Ok, I put in an absolute ton of work into this for the update. In fact, I completely changed how the game's data was handled to allow for modding. Before, everything was part of a big ol' JSON text file. Yes, this let you mod but it was really not fun. It also made it impossible to have multiple mods at once. Now, all the game data is represented by Unity's scriptable objects. I've also expanded my build pipeline to export a separate Unity Project which houses all of the scripts and data required to make these. This project can be accessed by anyone through github. It can be used to create and edit the data which can then be built and used as a mod. All the modder needs to do is put this data into the Mod folder in the game's folder, and the game will try to use this new modded data. Either overwriting old data, or adding it into the game. I am going to make a video to fully explain this process in the next couple days. I'll go into much, much more detail about how this all works.

One thing I still need to add to the mod pipeline is the ability to have multiple texture atlases. Right now, if players wanted to have multiple art style mods, that wouldn't really be possible unless, the art mods were all from the same modder and they created just one atlas. As soon as you have multiple different modders with their own atlases, it won't know which ones to use. But, that's definitely on my to-do list! :)

You'll notice their is a new faction (much like player, neutral, hostile) called 'captured'. This faction is applied to, you guessed it, captured entities from cages. It has all the same functionality as the player faction, however, captured entities will try to stay in their designated rooms AND will only eat/drink from those room. Make sure to keep those rooms stocked with food/water so your captured entities can eat/drink.

As well, factions can be used to limit room occupants. The prison cell is one such room that uses this setting to determine occupants. You can edit this faction setting from the Room Edit Window.

The Prison Cell is pretty much the equivalent of the Animal Enclosure, but for Sapient entities. Pretty soon I'm going to add some deeper mechanics to how captured entities react to their situation. And how they are housed in cells will play a big part into whether they choose to join you or try to escape or get sick, etc.

Matt Creamer, our wonderful composer, has created five new tracks for the game. Four of which are in this update. I will add the fifth track in patch 0.11.0.1. I didn't add it because it wasn't looping properly and needed Matt to address that. You'll also notice the new tracks are a bit quieter than the previous ones. Matt is currently normalizing all these volumes and those changes will be in the next patch as well.

Ok, I'm not going to lie, I did a terrible job tracking this update's notes. I was going through a lot of personal stuff and neglected to track things as I went. Lots of small tuning changes and UI improvements went untracked and I apologize for that. Going to track these better going forward. Here's what I managed to jot down:

Conclusion and Up Next

This next week I want to focus on bugs (as well as make a tutorial video for mods!). I know there are lots of new issues with how entities are prioritizing stockpiles and some auto-jobs not being created. I want to spend the entire week hyper focused on cleaning all those issues up.

After that, I want to add the remaining props and items I have on my Ardyn to-do list. I wasn't able to add them all in and there are a few to help round out the Ardyn tech tree.

I'd also like to work on polishing up and tuning this update for about three weeks. I think that will be enough time to make it feel really nice and then I'll push it to the main production branch once it is in a good place.

Once this update is done, I'm going to jump onto a little content update that focuses on adding more events, props, items, and summons. I think it's time to start adding to the depth of the game now that we have a third race. I want to flesh out (HA) the Ancient race a bit more as I think they are the most lacking in terms of things to do. Void magic is a powerful tool, but it's also extremely risky to use because it attracts the attention of other entities in Odd. Summoning creatures from the void is a huge advantage but it will mean the Ancients have to also be prepared to fight off the slumbering void creatures that are awakened by the large magic use.

Well, that's all for now. If you've read this far, bravo! I appreciate you taking the time to read through this. I know it's a lot. As well, thanks to all of you for your support and feedback and kindness. Many of you messaged me about my grandfather passing with kind words and I read all those. I hope you know that these messages keep me going.

Thanks and have a wonderful day!