Hope you are having a great start to your weekends.

I've just uploaded version 0.11.0.8 and this one is more of a content patch for once. There's a bunch of stuff I haven't added to the Ardyn expansion yet, and, now, I'm working on adding these things. And, it's not only the Ardyn race that I'm focusing on for content. I'm working on lots of stuff for the Humans and, especially, the Ancients. 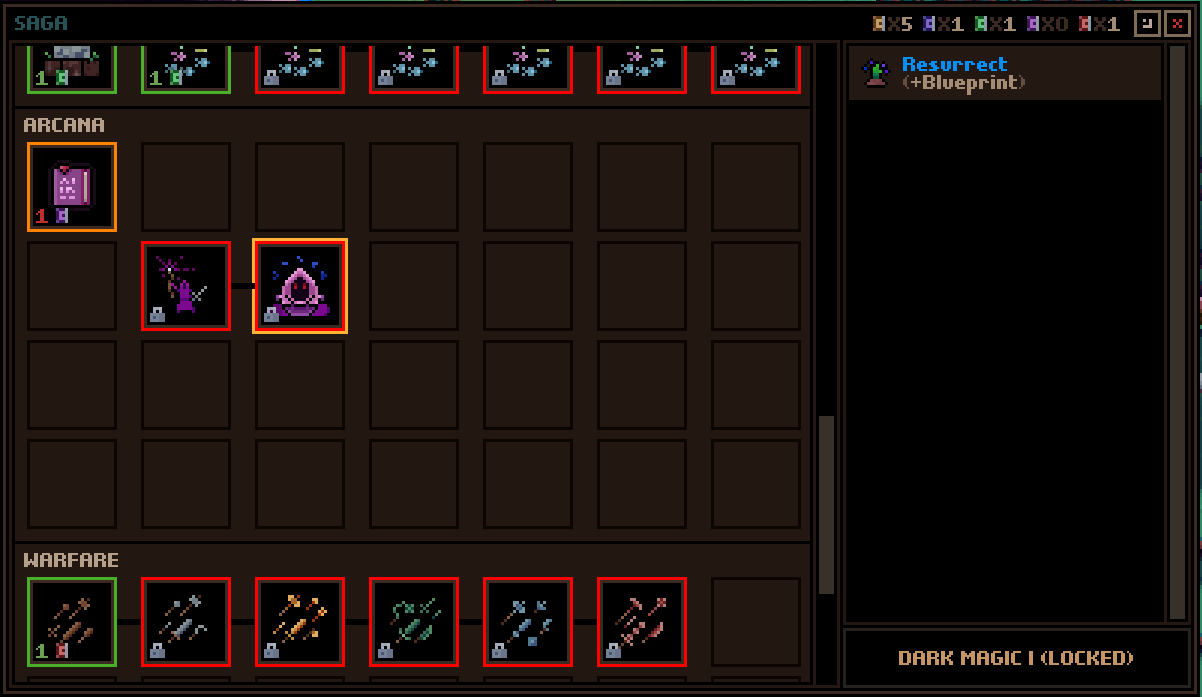 You'll notice the Arcana research tech tree is a bit sparse. I've moved a lot of stuff over to the Ancient tech tree, to round out some of their uniqueness. Magic isn't intended to be this easily obtained thing. It's supposed to be difficult to achieve. Unless, of course, you're the Ancients and have thousands of years of mastery to work from. Don't worry, I'm adding much more stuff to the Arcana tree.

The first of these additions, as you'll see, is the Dark Magic I node. This introduces a new job (done at the Arcane Study) which lets summoners resurrect entities. This required the addition of some new code to assign more unique information to items. Later on, I want players to be able to edit this information and make their own unique items, but, for now, it is being used by entity remains to connect an entity to an item. For example, a Human remains item having the information for the Human that created it. These remains can then be used to resurrect that past entity.

Resurrected entities have all the same stats as their previous selves, with the exceptions of a few things. They don't get hungry, thirsty, or lose energy, but they also don't naturally heal, or procreate. Now, they will still die from old age, but I'm a bit on the fence as to whether this is good or bad. The intention is to keep Ardyn players from cheesing this ability to have an infinite supply of resurrected bodies to retroanimate. But, who knows, maybe I'll change this down the road based on feedback.

Lastly, coffins and tombs will keep remains from decaying. I think I'm going to add some sort of graveyard/tomb room soon to make it easier to organize and stockpile the dead into coffins and such. For now, you can use a regular old stockpile with just remains enabled to have them carry the remains into those props. They are a great way to preserve the dead for later resurrection. >:) 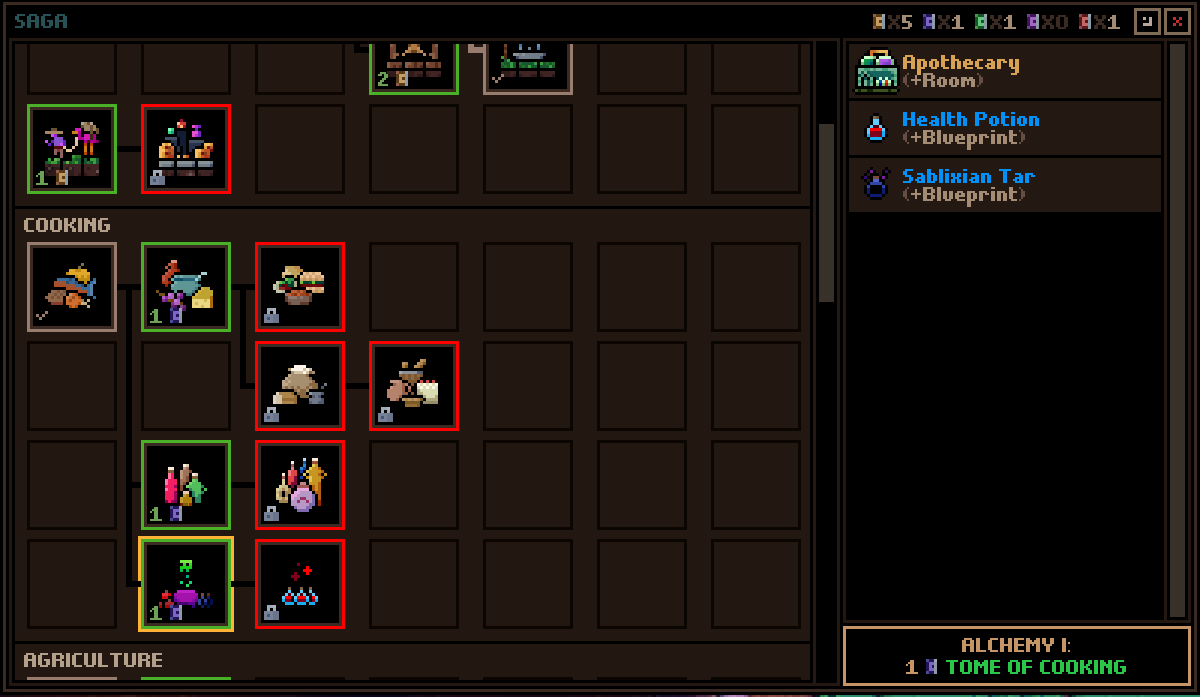 You can now unlock the Alchemist profession, and the Apothecary room in the Saga, cooking tree. This is very, very early days for alchemy. I have so much planned for this profession. I will be introducing strange and unique diseases to the game soon and the alchemist will be a big part of fighting those afflictions. As well, and this is far down the road, I want players (perhaps the more sinister ones) to be able to infect other kingdoms with diseases using their alchemists and merchants.

For now, I've added two items to make here. Health Potions, and Sablixian Tar. Also, you'll notice the new item category, Potions. Health potions can be used to heal wounded entities, while Sablixian Tar is a rare refined material that is created with Sable Chunks. It is used by the resurrection process, but will also be used by maaaany other dark magic focused things in the future.

I want to also add the ability for entities to hold types of items for quick use. For example, in uniforms, you would be able to tell certain entities to hold, say, potions. That way, in combat, they could quickly consume a potion instead of having to go to the alchemist for healing. I'd also set this up for food and drink items to be quickly consumed.

You'll notice a lot of stuff has moved around in the Saga window, and you *might* have to unlock some things again. I'm in the process of tuning these progressions as well as making space for things. The war tree, for example, has seen a huge consolidation of nodes. This is to free up some room, but most importantly, remove a lot of grind just to get material specific gear. I'm working on adding some fun new research for the War tree, so, stay tuned for that!

Ok, let's take a look at the patch notes:

-Content: Added merchants for Ardyn and Ancient settlements.
-Content: Added Sablixian Tar item which can be made from Sable Chunks at the Apothecary.
-Content: Added Apothecary room, Alchemist profession, and Alchemy skill.
-Content: Added resurrection job to Arcane Study. This brings entities back to life. Resurrected entities are slower, and cannot rest, eat, sleep, or procreate.
-Content: Added Dark Magic I research node.
-Content: Added Healing I research node.
-Content: Added Alchemy I research node.
-Content: Added health potion and heal patient jobs.
-Content: Added icons for each summon. This also fixes the incorrect sizing of the entity icon for the auto-job window.
-Content: Items can now have unique names. This means items like remains will keep the information of the entity which is tied to them. This will be used later on to create unique named items too.
-Content: Bunch of new audio for various crafting things.
-Content: Added Potions item category.
-Bug Fix: Adding jobs to a room manually would not do anything, and was also spitting out a serious error which would interfere with lots of other systems.
-Bug Fix: An entity would get stuck if they were the target of a job and couldn't find a path to the job point.
-Bug Fix: Lectern of knowledge had an incorrect inline icon.
-Bug Fix: A save file corruption related to a very rare entity state in combat.
-Bug Fix: Entities would snap to land when swimming.
-Bug Fix: Entities would play idle timeout animation when working.
-Bug Fix: Drag camera with mouse wasn't working in overworld map.
-Bug Fix: Some drag movement glitches. Movement should be smoother when dragging the camera with the middle mouse button.
-Bug Fix: Entities were not being selected even though they were highlighted by the cursor when 1z layer up from the entity.
-Bug Fix: Certain research trees would repeat. i.e., The industry research tree showing up under the Ardyn research tree.
-Bug Fix: Entities wouldn't leave a room after limit to family was turned on.
-Bug Fix: Previous camera zoom was not loading correctly.
-Bug Fix: Capturing Humans would enable the settler wave event.
-Bug Fix: Entities would not use the bow animation when firing arrows.
-Bug Fix: Settlement music could start playing when the overworld map was open.
-Bug Fix: The camera zoom level number wasn't updating in the overworld map.
-Bug Fix: Population max wasn't always being considered when entities procreated, resulting in populations going over the set number.
-Bug Fix: Settlements would stop having children after longer player sessions.
-Bug Fix: Props that can rotate weren't snapping to fixtures.
-Bug Fix: Entities that were companions were getting stuck in separate houses (as owners).
-Tuning: When searching blueprints, if the search text also includes the name of the room associated with the blueprint, it will appear. i.e., searching Immortality Tomb, will show the Voidweave Sarcophagi.
-Tuning: The coffin and tomb now keep remains from decaying forever.
-Tuning: Added a green flash to indicate healing.
-Tuning: Tuned the required items for all the tomes to be a bit more difficult to make.
-Tuning: The Chaos Construct and Transmutation Chamber are now unlocked in the Ancient research tree only.
-Tuning: All weapons, and armor for the War research tree have been consolidated into one row.
-Tuning: Ardyn are now included as enabled by default for certain notifications like death.
-Tuning: Bone no longer decays.

And there you have it! I'm going to continue working on lots of new content. I've got some fun new Ancient related summons on the way! As well, I'm working on some new Sable blocks to build.

Thank you for the support, feedback, and for playing!