Today's patch has some great fixes and tuning changes, but it also has some new rooms. Well, the Tavern won't be new to some of you as, once upon a time, it used to be a room in the game. But enough reminiscing! Let's take a look. 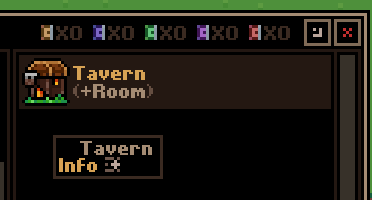 It's time to re-enable this room as I am starting to feel like it has an actual purpose. That is, to improve the spirits (heh) of the masses. Right now, the Tavern has one job you can give it, and that's, "Relax With Drink." Entities will grab a drink, and go sit at a seat in the tavern, and refill their Will (happiness). I'm going to add a bunch more little jobs for this room. It won't just be this one job. But this is a start! There are even plans to have travelling bards which could come and play at your Tavern, but that's getting ahead of myself.

One thing about tuning I'll mention related to this. Alcohol no longer has the same buffs as things like water. Alcohol now provides a smaller thirst buff, a negative energy buff, BUT increases happiness for a time. 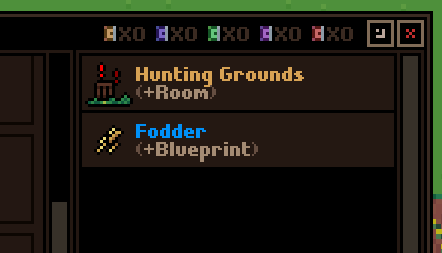 Much like the Tavern, this is the early stage of this room. For now, it provides one job which is the automation of capturing entities in cages. I will soon be giving it the added job of having hunters actively hunting prey and the sort.

The Workshop is a new room which provides job automation for the most rudimentary of jobs out there. Those jobs that don't really have a specific profession or skill that can be associated with them. You know, making coal, wicker objects, and, oh, I don't know, BONE ARMOR! 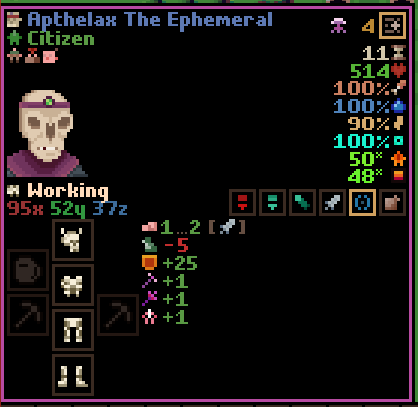 Yep, you can now unlock bone armor from the War tech tree. I will be adding more bone items soon!

There's a new job, "Integrate As Citizen," which lets you convert captured sentient entities into full citizens. This coincides with a slight naming change for the research skill. This skill is now called writing. I made this change because I feel writing can be more broadly used than research. For example, the aforementioned integrate job requires someone with the writing skill to draft up the documents to make the captured prisoner a citizen. Captured, sentient entities are given permission (lol) to have relationships, change profession, and unlock their technology in the Saga window. But, keep in mind, they need to also be happy! So, make sure they have a bed to sleep on and, hey, maybe let them go to the Tavern for a drink every once in a while?

I've done a bunch of balancing for the Ardyn race. Namely, they will no longer take 1:1 age off animals they retroanimate. Instead, 1 year of the animal gets multiplied by the Ardyn survival skill. Also, animals live a tiny bit longer. These things should keep your critters around for much longer.

I've also gone ahead and merged the fishing rod unlocks into the industry materials progression nodes. This is to make some space for new agriculture tech, but also because it was annoying to unlock fishing in the agriculture tree.

There are some other tunings mentioned below...

Here are the notes:
-Content: Added 4 bone armor items.
-Content: Added bone armor node to War research tree.
-Content: Added workshop room. This is where super basic crafting jobs can be done. i.e., bone/clay/thatch item crafting.
-Content: Added hunting grounds room. This is where capture jobs can be automated.
-Content: Re-enabled the Tavern room.
-Content: Added relax with drink job to Tavern. This improves settler happiness.
-Bug Fix: Some items would appear as inaccessible for containers surrounded by other containers on their four adjacent sides.
-Bug Fix: Unreachable item notifications would sometimes show the wrong item when the job required a type of item, rather than a specific item.
-Bug Fix: The item slots weren't updating after an item wasn't added/removed.
-Bug Fix: Some Nyctium items had incorrect inline icons.
-Bug Fix: The missing diet items in room notification was firing even when a room didn't have the diet items toggle enabled.
-Bug Fix: Sometimes entities (mostly animals) could start a gather item job.
-Bug Fix: Entities could sometimes start the same job at the same time.
-Bug Fix: The profession 'unused2' will no longer show up in the default skills list.
-Bug Fix: A typo where the Raw Food tooltip said it provides a worse bonus than Raw Food.
-Bug Fix: Companion statuses were being reset which would cause entities to leave/join homes constantly.
-Bug Fix: Inline icons on the room edit screen would appear duplicate for additional room owner group entries.
-Bug Fix: Newly spawned entities would show healing FX.
-Bug Fix: Fish would get stuck at the bottom of bodies of water.
-Bug Fix: Stone Dart and Stone Spear would not spawn a projectile.
-Bug Fix/Tuning: Hauling jobs weren't being created when there were other hauling jobs present.
-Tuning: Alcohols now provide less of a thirst buff, an energy debuff, and a new happiness buff.
-Tuning: Tired entities will now receive a small debuff to happiness.
-Tuning: Sleeping on the ground will lower entity happiness, and sleeping on a bed will raise it.
-Tuning: Non-sapient entities now get a small buff, "Ignorance Is Bliss", to happiness.
-Tuning: The manual input for room auto jobs was displaying incorrect text for queueing jobs. This has been changed to accurately describe that the jobs are manual. Additionally, if no manual jobs can be added, it explains why.
-Tuning: The default skills page now lists professions alphabetically.
-Tuning: Animal Enclosure stockpiles now start with a default priority of 2.
-Tuning: Beverage and food provide higher hydration/metabolism buffs.
-Tuning: Raised entity age to become elder for several animals.
-Tuning: Retroanimation now only adds 1 age to the target entity on each use. The amount lost for the Ardyn caster is based on their survival skill, so they'll still get a good return back.
-Tuning: Added extra action text to show when the source entity receives a bonus from their attack. i.e., when an Ardyn lowers their age from retroanimation.
-Tuning: Captured non-sapient entities will no longer jump into combat unless given an attack order.
-Tuning: Research has been renamed to Writing.
-Tuning: Coal, rope buckler, and pointy stick are now made at the workshop and requires misc skill.
-Tuning: Fishing rods are now unlocked in industry instead of agriculture.
-Tuning: The melt threshold for ice blocks has been raised.
-Optimization: Reduced memory allocation within pathfinding.

That's all I've got for now! I meant to add some more tools for various professions into the patch, but I didn't have the time so I'll save them for next week's update.

Special thanks to those constantly giving me bug reports, save files, and feedback. You are stars!

Have a great weekend!