I took a bit longer with this patch because I needed to make some tools to help me work on tuning. Tuning has always been an extremely difficult and slow process for me on this game. So, I figured it was time to dedicate hours towards making that stuff easier for myself. I've tuned a bunch of things in the update, but there's still lots of work to do, especially with late game progression.

There are some other great things in this update. Let's take a look!

You'll notice a couple new buttons on the HUD (as if we needed more!) which are intended to clean up and organize some things. The inventory button has also been moved over there. I'm trying to group these various buttons together based on functionality. So, the buttons on the top-left are grouped together because they all open up 'tracking' windows. Whereas, top-right is utility windows, bot-right is toolbars, bot-left is overlays.

Let's take a look at the new buttons/windows: 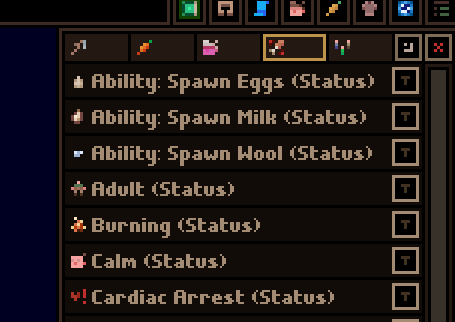 I've added a new window for tracking stats on the top bar in the HUD. There are five types of stat to track up there:

The top bar didn't have a localized place to manage these things, and I felt like it was time to add something to help with confusion. Also, there's no longer any limit to how many can go up there. 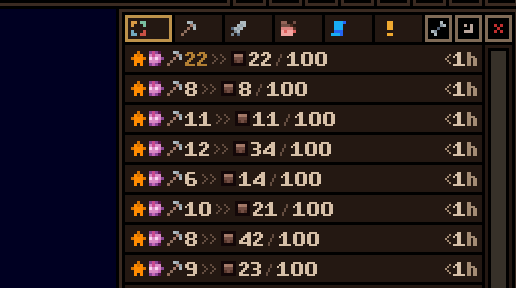 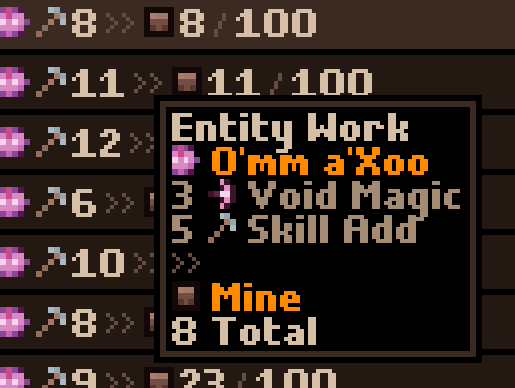 I did a huge pass on notifications to make things a bit clearer. With work and attacks especially. You can hover over each notification to get more info which is great to understand why your entities might be doing more or less output when mining. I plan on adding more notifications in general to help communicate various things, so feel free to let me know if you'd like to see any added. 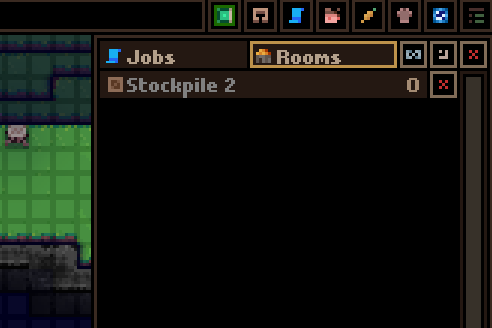 This is the panel you normally see when you open the jobs or rooms toolbar. I want to expand upon this window some more, but you'll notice the addition of a linking button. This lets you toggle whether the window opens when the jobs/rooms open. Helpful if you don't always want this window to open with jobs/rooms.

As you can see, I've removed the far right control group buttons and put those into their own window. You can edit and view control groups just like before from here.

-Content: Added Ardyn settler wave.
-Content: Added late-game Human settler wave for settlements with low populations.
-Polish: Did a complete pass on notifications and added a bunch of tracking windows.
-Polish: Added feedback to the Saga button to indicate if a node can be unlocked.
-Polish: Added an 'auto-slot' feature to inventory items. When a uniform slot is visible, and an equippable item is clicked, it will automatically be slotted to the best slot candidate. The best candidate is one that is empty, or doesn't have the same item id, or doesn't have an item about to be equipped.
-Polish: Added hotkey info to inventory items to show how to equip items if no equipment display is visible.
-Bug Fix: Hostile and neutral entities would teleport to the closest player position if they were stranded.
-Bug Fix: Sometimes items being unequipped would be destroyed instead of spawned.
-Bug Fix: Added missing iron hammer icon.
-Bug Fix: Stone buckler, bronze cap/blood cap mushrooms, and iron hammer had incorrect graphics.
-Bug Fix: Dead entities were not being removed from rooms if the rooms were set to manual.
-Bug Fix: Temperature would not show a negative sign on the entity tooltip.
-Bug Fix: Work logs weren't showing the correct target attribute.
-Bug Fix: The difficulty rating determined by avg settler level was incorrect.
-Bug Fix: General visual layout fixes for lists where items were misaligned or popping into position.
-Bug Fix: Entities were not gaining happiness when sleeping in beds.
-Bug Fix: Very rarely an Ancient could get stuck in a sleeping loop.
-Bug Fix: Entities should no longer enter combat if all their combat skills are disabled. This resolves an issue where entities would not equip any items or work if a threat was nearby.
-Bug Fix: Entities that are given an attack order and have no combat skills enabled, will have those skills auto-enabled.
-Bug Fix: Worlds would not load when the Z depth was changed from the default 64 depth to 16.
-Bug Fix: Production rooms would show jobs for blueprints that had yet to be discovered.
-Bug Fix: Incorrect icons for several butcher blueprints
-Bug Fix: Uniform buffs and attacks weren't updating right away when items were added/removed.
-Tuning: Having two one-handed weapons now provides a 10% chance for both items to attack/work on a target.
-Tuning: Ancients will now gain happiness from sleeping in a Sarcophagus.
-Tuning: Re-organized several industry research nodes. Stone/wood, and iron/steel can now be unlocked as a choice rather than sequentially.
-Tuning: Did a complete tuning pass of all tools and weapons which focuses on the progression and differentiates types of weapon. i.e., Crossbows will shoot farther than bows, but do a small amount of damage less.
-Tuning: Evasion is now a chance to dodge an incoming attack as a percent, rather than as a comparison to a dice roll.
-Tuning: Added Happiness % to entity tooltip.
-Tuning: Stoneleaf items are now made at the workshop using the misc skill.
-Tuning: Stone/wood workbenches now unlocked in the Basics I research node.
-Tuning: Entities now spawn with randomly generated items based on player progression.
-Tuning: Harmful diet items will damage entities over time.
-Tuning: Loved diet items will improve entity happiness over time.
-Tuning: The Wyrm event should no longer spawn thousands of items.
-Tuning: Spellbook of healing now actually heals.

Thanks everyone! Have an awesome day. :)