Long time no see. I have had quite the event filled last month, which includes my SSD corrupting and me needing to reset my desktop. So, I do apologize for the longer wait for an update! Also, sorry for the lackluster patch notes. I lost my patch notes on the corrupted SSD, but I did my best to create a new patch note list from memory. As you you'll see, my memory is apparently like a spaghetti strainer.

This patch adds in quite a few new content things. Lots of new blocks and props to build from things like sable, rutile, bronze, etc. But additionally, a new summon. Sort of. I guess it's more like a new spell? What I'm referring to is...

This is a new status that can be applied to Ancients. It makes them extremely powerful, but it does make them less effective in void crafting and summoning. It's essentially a rage-mode for Ancients. Keep in mind it cannot be reversed! 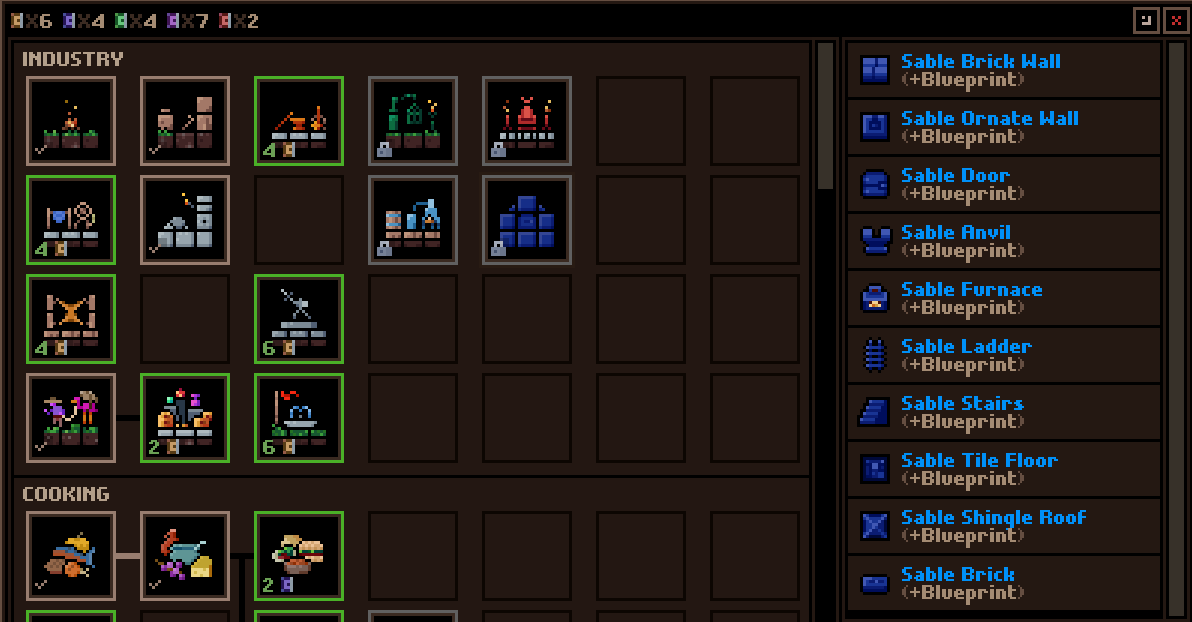 I added quite a few things to the various material types. I didn't get to add all of the ones I wanted, but you'll notice quite a few new things. Check them out in the Saga window the next time you play. :) 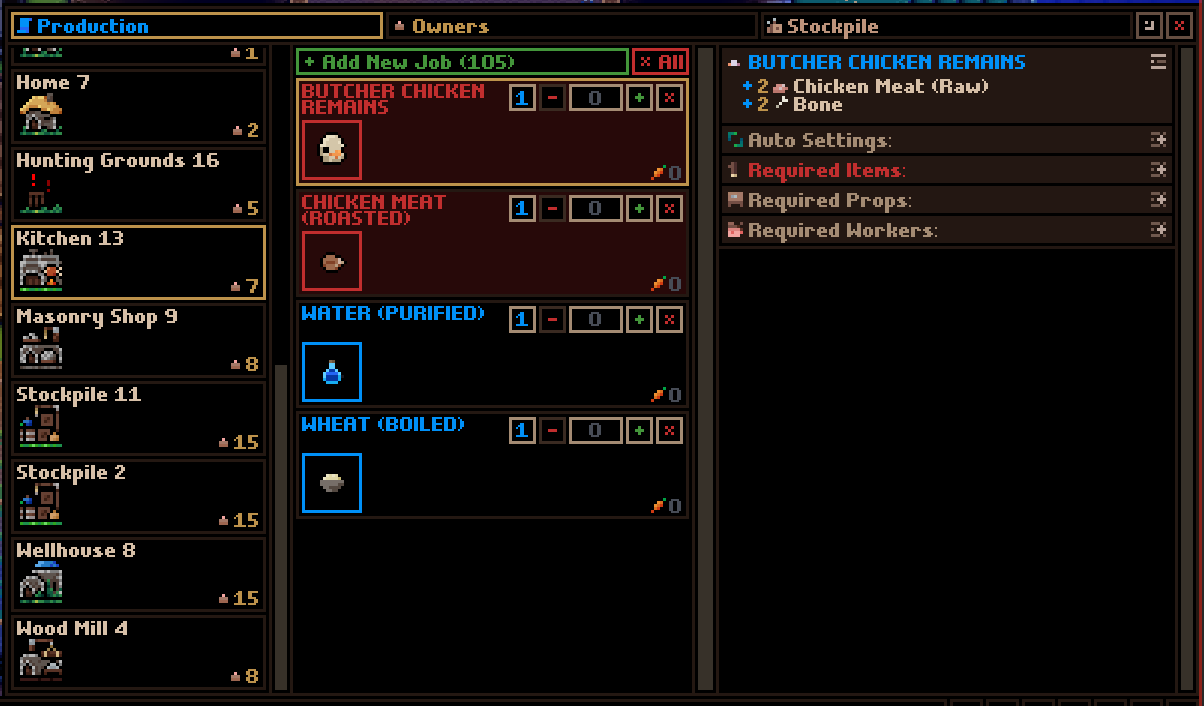 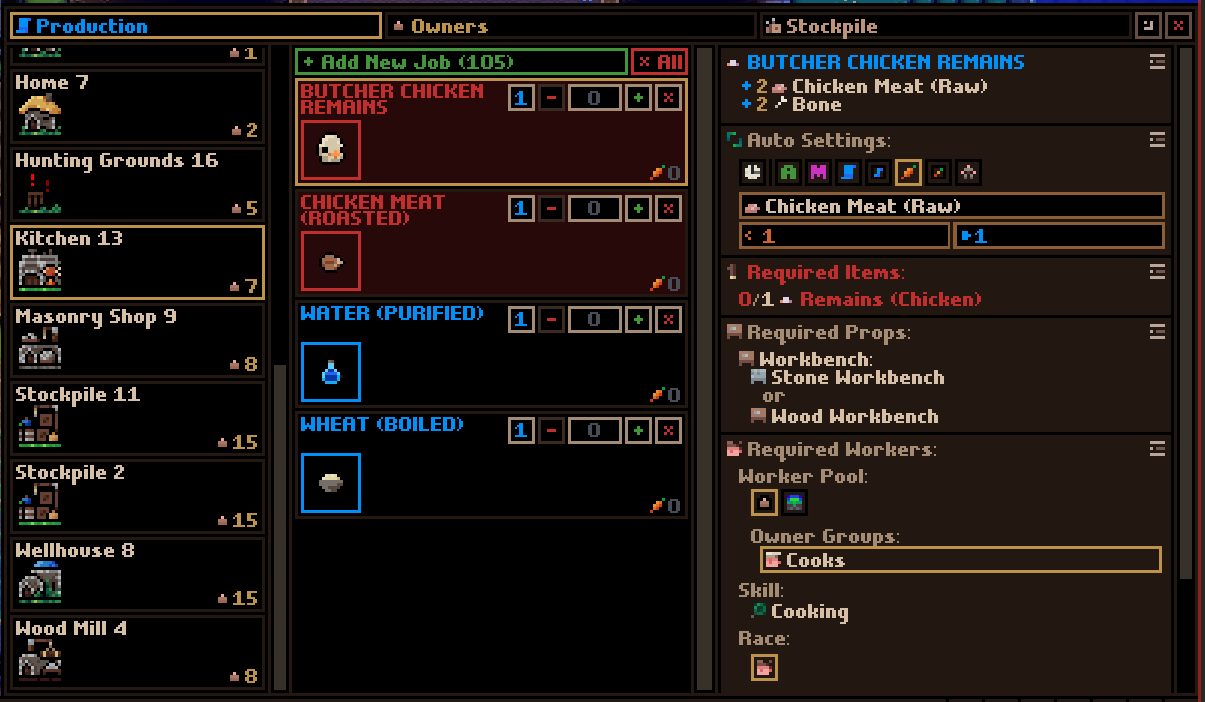 I can almost hear the groans about yet another change to screens. I'll admit, UI is not my strong point. I'm really trying haha. That said, let's take a look at what I've gone and done now.

Namely, I've consolidated the room owners, production, and stockpile options into one window. I've cleaned up a lot of the various screens by removing unnecessary visuals, moved lists to the left of windows, unified colors schemes, etc. The production window has seen a lot of changes to help make things easier to use and clearer. You'll notice that you can now collapse and expand a ton of the UI elements to reduce the clutter. Plus, it should be much easier to tell why you can't do a job.

I've added (back) in the ability to queue jobs. So, if you manually add some jobs to a room, it will add as many as it can based on available work stations, and the remainder will be queued until the work station becomes available.

-Feature: Job Queueing in Room Edit window. When increasing the job count for an auto-job, any number that exceeds the available work station count will be queued. Queued jobs are then added to the room when work stations become available.
-Content: Added more props, and blocks for several material types.
-Content: Archenthrall summon.
-Tuning: Increased stockpile max cap to 99999.
-Tuning: Climbing down 1 block now receives a small speed bonus. This is to simulate an entity simply jumping down onto the ledge below.
-Tuning: Ancients will now start with the Magic Fighting skill enabled by default.
-Polish: Moved all window lists to the left to help players read left to right better.
-Polish: Added quite a few utility options to lists, especially for things like remove/add all.
-Polish: Unified the colors for all windows to better communicate button purpose and reduce clutter.
-Polish: Combined the production, owners, and stockpile room windows into one window.
-Polish: Redid the layout for production to make job management clearer and easier.
-Polish: Added better feedback to jobs and room owner settings to communicate why a job can't be done, and why an entity won't join a room.
-Polish: Added the option to select where room job workers/subjects are pulled from. You can now select specific rooms groups or the entire region.
-Bug Fix: System keys like ESC were not working in the front end.
-Bug Fix: Some information in the overworld screen could get cut off on smaller resolutions.
-Bug Fix: Many scenarios/threats weren't activating if the settlement had a complete water border.
-Bug Fix: Control group entities weren't saving.
-Bug Fix: Cages and traps weren't triggering correctly.

This will be my last content update for the expansion. The next two weeks are going to focus on bug fixing and tuning as I want to move the beta to the live branch in the middle of October. I think this patch will have a couple nice production window bugs for me to fix right away. So, if you see anything there, please let me know!

Thanks and hope you all have a solid weekend!