This update includes mostly fixes and tuning, but I snuck in a new panel for rooms. It's part of the room stockpile panel. This panel lets you select who's hauling for a stockpile. By default stockpiles now pull haulers from the region (so, all player controlled entities with carry enabled). However, you can select a specific owner group to do the hauling if you choose. Additionally, the window will show a list of candidate haulers and why they may not be hauling for the stockpile. 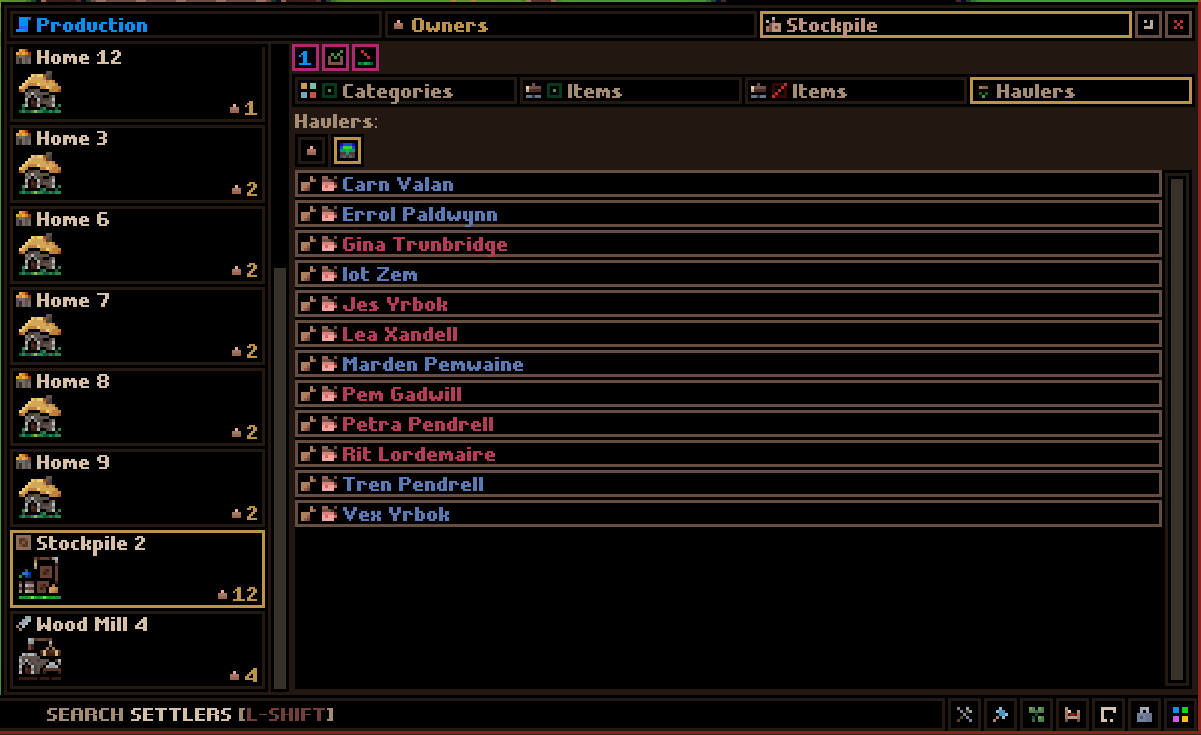 Ok, here are the notes:

-Feature: Added hauler options to room stockpiles. This lets players change who is hauling items for stockpiles. By default, stockpiles will use the region as a pool for haulers, but players can change it to any room owner groups if they wish. Lastly, candidates will be listed and any errors for keeping them from hauling items will be shown. i.e., missing carry skill.
-Feature: Added option to add inline icon to room naming.
-Bug Fix: Migrating to a new tile without items would have jobs appear as unable to start.
-Bug Fix: Trees which produce fruit (Apple and Palm) were not spawning items. Trees will now spawn items when mature and in the correct season.
-Bug Fix: The freezing notification settings used the wrong inline icon.
-Bug Fix: Some item stats weren't showing.
-Bug Fix: Some scroll bars in the settings window didn't change their respective setting.
-Bug Fix: Sickles were buffing Harvest (deprecated skill) and not Horticulture.
-Bug Fix: Small glitch when job/build/room menu is first opened where the designations list is maximized for one frame.
-Polish: Added tooltip info to communicate when trees spawn items.
-Polish: Added an overlay option for item jobs. Item jobs will no longer be visible when the jobs menu is open. Players can hold G or TAB to show the item jobs overlay. The reason for making this change was to clean up the visuals while building. Item job overlays would obscur lots of the terrain when placing blueprints, meaning players would need to toggle jobs on/off in order to see where they are building.
-Tuning: Cabinets can now also hold tools.
-Tuning: Bows now fire farther than crossbows, but deal less damage.

Thank you and have a wonderful weekend!